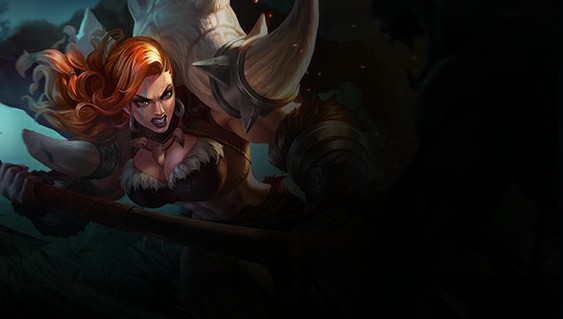 Her first skill follows, which is Combat Ritual, This is a skill used for chasing and zoning while also dealing a decent amount of damage to her target. Lastly, her second skill which is the Art of Hunting, this also deals damage but this skill is mostly for crowd control, so it can stay at level 1 and can be maxed last.
Petrify is very good when used in Hilda, Hilda’s kits contain a lot of crowd control but it targets a single enemy only. Using petrify will help Hilda in controlling the enemies around her target and it also eliminates the chance of her target to escape.

Hilda locks onto an enemy target, each time dealing 220( +100% Total Physical Attack) (Physical Damage). Skill can be released 3 times at most. The 2nd attack will deal damage to target's surroundings, and the 3rd attack will knock back the target and surrounding enemies temporarily.

Unique Passive - Valor: For each Basic Attack received, gains 5 extra Physical Defense (up to 25) for 3s.

Unique Passive - Twilight: Every 1.5s, the next attack deals extra Magic Damage equal to 35 plus 5% of the hero's Extra HP.

Warrior boots, because of all shoes available, this one provides the most economical stats for her, it offers armor as well as movement speed.
Cursed Helmet, this gives magic resistance to Hilda, it also deals 2% of her max HP as magic damage to nearby enemies surrounding her.
Blade Armor is a good counter for harassment, if she’s chasing an enemy with long range, for sure they will deal damage to her when she’s still in a distance so this is a good choice for her.
Athena’s shield, this offers HP as well as magic resistance to Hilda. She also gets a shield every 30s to absorb damage, this shield effect increases as the battle goes on which is very convenient for her since she can hold on to battles for she is very tanky and she has an Hp regen whenever she goes to the bushes.
Demon’s Advent, this gives Hilda another source for her tankiness and this also goes hand in hand with Blade Armor, while Blade Armor counters the basic attacks, Demon’s Advent lowers the enemy’s attack power by 4% making it impossible for them to harass Hilda while she’s chasing the target.
Immortality, this completes Hilda’s items, coupled with Athena’s Shield, you can tank far more than what you expected, This gives Hilda another magic resistance and makes her HP go up as well. The passive of this item gives Hilda another shot to tank while the fight is still on-going or to run to the nearest bush and regain her health.
Overall, this gear gives Hilda the HP, armor and magic resistance she needs to tank and be at the front of her teammates while also giving Hilda enough damage to deal to their enemies.

Tips: Hilda can be teamed up with any hero but it would be better if she will be teamed up with heroes who can cope up with her movement speed when she uses Combat Ritual or with heroes who have disables like she does. It would also be better if she is teamed up with assassins who can hide in a bush where she’s also hiding and focus on the backline of the enemy’s team. It would be an easy 4v5 once that their target is dead since Hilda’s cc + Assassins damage is a very deadly combination

Hilda can counter this hero during the game

Tips: Hilda counters heroes which are squishy and has low mobility. Most of them are mages, assassins and marksmen since they deal a lot of damage yet are very easy to kill as well. She can focus on targeting the backline which consists of the said roles since they are to be protected and destroy the enemy’s play since tanks are useless without damage dealers.

Hilda should be carefull with this hero

Tips: Hilda is countered by heroes who deals damage based on the enemy’s HP such as Balmond and Karina, and by heroes who have lots of armor penetration, mostly marksmen such as Moskov, Karrie and Roger. Support such as Diggie with its crowd control abilities and its ultimate skill which is like a purify for all allies also counters Hilda since her crowd control skills are useless while the skill is in-effect.

Learn This hero Next

www.mlbbhero.com is the website and platform to go for all mobile legends guides, tiers, strategies, and statistics. We are your MLBB guide from the land of dawn, assisting players of all skill levels in improving and reaching supremacy.